My Story and Some History

It’s September 12th, 2019. Eighteen years and one day after the North and South Towers of the World Trade Center were attacked by two planes, a third plane crashed into the Pentagon, and a fourth plane, headed for Washington, DC, was  taken down by passengers onboard before it was able to continue the day’s destruction. At the time of the attacks, I lived in Northern New Jersey – 16.5 miles separated my childhood home from ground zero. My high school was dismissed early and a group of my peers and I headed to Eagle Rock Reservation to watch what was happening across the Hudson. We’d headed to the Reservation numerous times before to look at the New York City skyline and admire its beauty, all the while safely tucked into a 400+ acre forest reserve in West Orange, NJ. George Fattell captures the view we went to see beautifully in his blog post: A View of the World Trade Center From Eagle Rock Reservation in July, 2001. 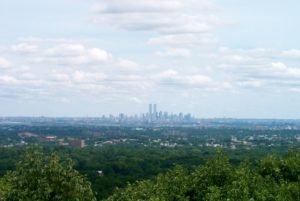 Aside from the awkwardness of our crowd’s being immense yet incredibly silent, the air was thick with fear. The destruction was so real it became surreal. Seeing the images on television was devastating; seeing the smoke billow with my own two eyes was unfathomable. The image below was captured on 9/11/01 and shared in The Seattle Times in a piece called: 9/11: Images from the day that changed history. 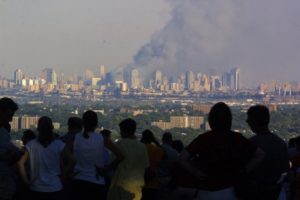 While many people were affected by the attack, I was young and impressionable. My location enabled me to witness the nightmare. Many of my fellow Americans lived thousands of miles away from the billowing smoke and permeating nausea that lingered for days and weeks. They could certainly have empathy for the situation, but they couldn’t experience it as deeply.

On October 20, 2002, Eagle Rock dedicated a memorial to 9/11. It includes pieces of the buildings and the debris salvaged from the wreck. The names of all the lives lost are etched in stone, and a special embossed metal book calls out each NJ resident killed in the attack. There are sculptures for the children lost, for the heroes who gave their lives, and one for the canines that assisted in the rescue efforts. If you look at the view now, even on a cloudy night, you’ll see something more powerful, a bald eagle – American’s national bird – looking over that slightly shallower skyline. 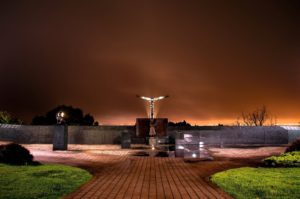 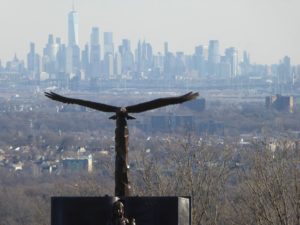 The first image I shared was the way I viewed NYC from Eagle Rock Reservation from my birth to September 10, 2001. The view radiated power and strength. The second image I shared was what I viewed during the devastation. And the third and fourth images reflect the way I think of the skyline to this day. The final images exude intelligence, appreciation, and authority. September 11, 2001, happened. We can’t deny that. We learned a lesson. We are not invisible. We are not alone.

There have been times in my life at which I thought I was powerful and knowledgeable. There have been other times at which I felt destroyed. But the most important thing about destruction is that it need not be permanent. That which has been destroyed can be rebuilt. And in our determination to rebuild, destruction has the power to change us to redeem and restore us.

My children were born 14 and 16 years, respectively, after this American tragedy. They’ll have no idea what that day felt like. But they can know what it felt like for me, as long as I tell them. I’ll never know what it was like to watch JFK get killed, and I’ll never know what it was like to see my friends and family be drafted for Vietnam. History is a tricky thing: We must learn from it and accept its lessons, even if we don’t live it.

It’s no wonder humans survive by being storytellers. There’s no other way to learn from the past.