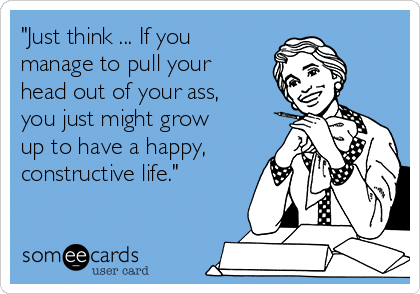 Since common sense was replaced by ignorance and pedantry, we’ve been beleaguered by all manner of lists, reasons, how-to articles, how-not-to articles, and sundry claptrap intended to convince us (or remind us) we have no idea what we’re doing and no right to think we do. To wit: “5 Reasons Why You Won’t Reach Your Fitness or Business Goals“.

I don’t know about you. But I can never get enough advice about things I can’t do, shouldn’t do, won’t do, or at which I’ll be a miserable failure if I even consider attempting to do them. Accordingly, I felt duty-bound to come up with a few more reasons for which you (or I) won’t reach some particular business or fitness goals:

Self-absorption isn’t the same as self-respect, kids. If you want to reach your fitness or business goals, you might start by (as the Irish say) getting a grip of your knickers.