5 More Scientifically Proven Ways to Give a Killer Presentation 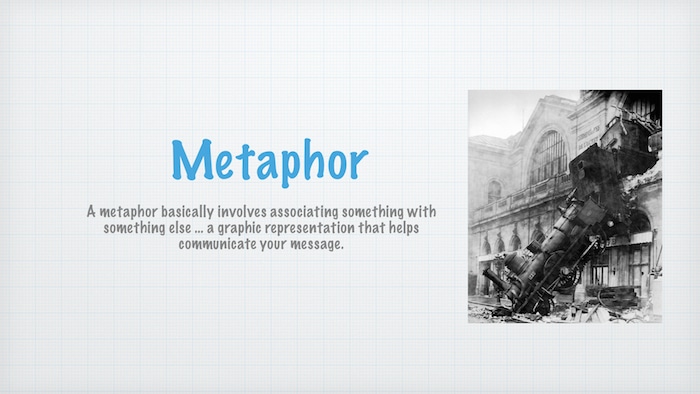 The other day, I came across an informercial for Prezi, not-so-cleverly disguised as yet another in the interminable myriad of how-to treatises to which we find ourselves ceaselessly subject in this, The Golden Age of Self-Evident, Sophomoric, and Unrequested Advice. This one added insult to injury by attempting to combine crass commercialization with science. Exhibit A: “5 Scientifically Proven Ways to Give a Killer Presentation“.

I knew I was up against a particularly pernicious strain of vacuity when Scientifically Proven Way #2 suggested I use metaphors, which the article defined thusly:

It basically involves associating something with something else.

Whoa! I admit I’m prone to increasingly frequent lapses of memory and cognition, but I possessed no recollection of metaphor having to do with basic involvement with or in anything. To settle my mind and my stomach, I took the drastic step of looking it up, a step which was evidently not available to the author of the infomercial. I found this:

1. a figure of speech in which a term or phrase is applied to something to which it is not literally applicable in order to suggest a resemblance
2. something used, or regarded as being used, to represent something else; emblem; symbol

Whew! I didn’t need to be right, but I was relieved, nonetheless. Metaphor wasn’t some kind of basic involvement after all, like a tawdry fling or petty criminality.

A metaphor is a manifestation of figurative speech, an abstractly representational expression. And since killer presentations are more art than science (Prezi notwithstanding, of course), my relief inspired me to note five more ways to give a killer presentation:

While there are no guarantees any presentation will be killer, if you heed these five tips, you’ll increase your chances of being taken seriously.

At the very least, your presentation won’t be a train wreck (metaphorically speaking).

Image by WikiImages, courtesy of pixabay.com.