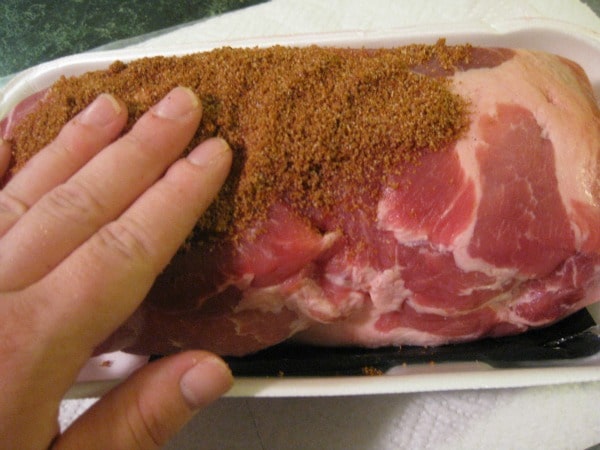 I have to admit I’m not one to keep up with all of the statutes that govern my particular state, which happens to be Connecticut.

Given the possibility that one can find himself in violation of said statutes — however unwittingly, innocuously, or innocently — it may be prudent to brush up on this stuff from time to time. Case in point:

Since I’m  a creature of convenience, I tend to be enamored of dishes I can prepare in my crock pot. So, I was especially pleased to find a recipe called, “Easy Slow Cooker Pulled Pork“. And I was particularly enthused about the savory mixture of dark brown sugar, chili powder, cumin, and cinnamon. Wow!

I was so carried away at the thought of those ingredients simmering with garlic and onions that I dived right into the preparation. I had the onions chopped, the garlic minced, and the spices mixed in no time, plowing straight into this step:

Rub the spice mixture all over the pork.

That’s when the trouble started. As it turns out — and unbeknownst to me (at the time) — Volume 8,  Title 22, Chapter 438e (Section 22-458) of the General Statutes of Connecticut, pertaining to Agriculture and Domestic Animals, includes this:

(a) Any person engaged in the act of rubbing any bodily portion of any cattle, calves, sheep, swine, horses, mules, goats, chickens, turkeys, or other animals shall be in violation of this section.

(c) Use of gloves of any material while engaged in the rubbing described in (a) above shall constitute no mitigation of the violation.

(d) Any person who violates the provisions of this section shall be guilty of a class C misdemeanor, subject to a fine of no less than $50 and no more than $500, and given a life sentence of vegetarianism.

So, now I’m out 500 bucks and will be munching celery and carrots for the rest of my life. Granted, some states show a little more leniency than Connecticut does. (If you’re caught rubbing a pork shoulder in Alabama, for example, it only means you’re engaged.) But it’s worth checking your statutes, nevertheless.

Some things just aren’t worth risking. Aye, there’s the rub.