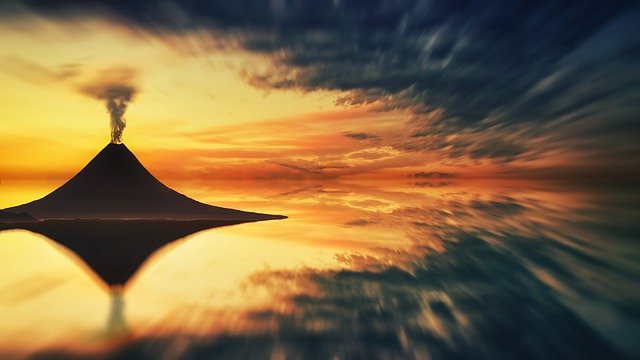 Unless you were otherwise preoccupied this past weekend, you may know an underwater volcano erupted off of Tonga on Saturday:

On Friday, the volcano sent ash, steam and gas up to 20 km (12 miles) into the air, Tonga Geological Services said in a Facebook post. It has a radius of 260 km (160 miles) … Jese Tuisinu, a television reporter at Fiji One [said], “It is literally dark in parts of Tonga and people are rushing to safety following the eruption.”

In addition to the pollutants the volcano launched into the atmosphere, it left all kinds of junk in the South Pacific Ocean, as well as the adjacent Solomon, Coral, and Tasman Seas.

Since the earth is no longer able to cleanse, restore, or regulate itself since people showed up (see “Change, Climate”), it was initially supposed that the airborne, earthborne, and waterborne schmutz from the volcano’s eruption would plague the planet forever. But the fears attendant to those suppositions were short-lived.

Immediately after the first farts of steam and gas bubbled to the surface of the South Pacific on Friday — and sensing the imminence of environmental calamity — Greta Thunberg was in her zero-carbon rowboat, accompanied by her entire PR, media, and speechwriting teams, on the way to the scene of the disaster. In a press conference from Tonga, Thunberg announced she will personally oversee the remediation initiatives to be undertaken by FLEECE (Fully Leveraged Economically Equitable Cleanup Efforts).

She went on to say:

As we pledged at the 26th UN Climate Change Conference of the Parties (COP26) in Glasgow last fall, all of the countries of the west will continue to redistribute their nations’ wealth and dump it into unmonitored, unenforceable, and fraudulent climate initiatives while all the countries of the east will continue to do whatever the hell they want. In the immortal words of U.S. President Joe Biden, “We hold these fruits to be self-edible because all men and women are created and by co … you know, you know the thing.” I couldn’t have said it better myself. And I certainly can’t argue with it. As for the people who caused this volcano, how dare you?!

No representatives of the Tongan government could be found after the press conference. It’s believed they were undergoing emergency treatment for ma ʻoku ʻikai lava ʻo faitoʻo (English translation: Terminal Embarrassment).

While there we no threats of new eruptions, efforts to evaluate the severity of the devastation were still being hampered as of Sunday:

The massive ash cloud covering the tiny island nation of Tonga prevented surveillance flights [from] assessing the extent of damage … Jacinda Ardern, the prime minister of New Zealand, told a news conference on Sunday that contact had not been established with coastal areas beyond the capital, Nuku’alofa. “Nuku’alofa is covered in thick plumes of volcanic dust but otherwise conditions are calm and stable,” Ardern said. “We have not yet received news from other coastal areas.”

In a touching  expression of empathy and a magnificent display of statesmanship, U.S. secretary of state, Anthony Blinken, said he was “deeply concerned”. Undersecretaries Larry Winken and Herb Nod couldn’t be reached for comment.

If you’d like to contribute to the Tongan Cleanup Fund, you can send your checks directly Greta Thunberg at 637 Snookered Aveny, Stockholm, Sweden, 103 16. Or you can call 1-800-FLEECED. Operators are standing by.