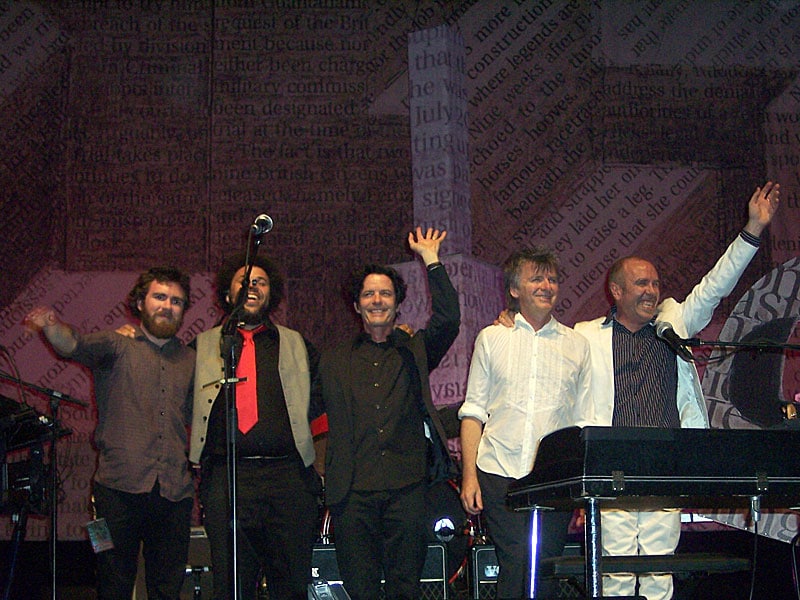 Recently, for the first time in nearly 30 years, I heard the song, “Don’t Dream It’s Over“, by the Australian band, Crowded House. (The band comprised Paul Hester, Nick Seymour, and the Finn brothers — Neil, Tim, and Dorsal.) Along with a beautifully melodic chorus, the song is notable for its place in Guinness World Records in the category, “Greatest Number of Non-Metrical Syllables Stuffed Into An Otherwise Metrical Line”.

I have to admit I don’t understand some of the seemingly arcane references and logical connections in the lyrics. For example, I have no idea what a deluge in a paper cup has to do with freedom, battles, or the road. I can’t even figure out how anyone could make a paper cup big enough to contain an entire deluge. But then again, I’m not Australian. Presumably, the meaning of this stuff is decipherable only by Aussies. I don’t know. But I do know I digress.

In fairness, the practice of cramming extra metric elements into the lines of songs isn’t new. In folk music, it was acknowledged and demonstrated by Tom Lehrer in 1965. Regardless of genre, I take the practice to be a matter of function over form; that is, if the pitter-patter of extra metrical feet is required to express something — and if said expression can’t be packed into a metrically perfect line — then you have to stretch a little. But how much is too much? I don’t know that, either. But the answer, apparently, falls under the heading of something like artistic license.

Now I’m towing my car, there’s a hole in the roof
My possessions are causing me suspicion but there’s no proof
In the paper today tales of war and of waste
But you turn right over to the T.V. page

Again, I’ll eschew a search for meaning and authorial intent here (other than to produce a hit song) in deference to aesthetic appreciation, the flouting of poetic convention notwithstanding. But I can’t resist the temptation to offer my own third verse to this hauntingly cryptic ditty:

There are sandwiches with, there are others without
Ask the plumber if the drain is clogged
Or if the chipmunks are hibernating
Until the vernal equinox clears the air
Then I’ll breathe freely through your nostrils
On my way home from my power mechanics class

UPDATE: As soon as I published this post, on the strength of the verse above, I was named Australia’s Poet Laureate. I immediately dropped Power Mechanics in favor of Modesty Lessons.