Do the Herky Jerky 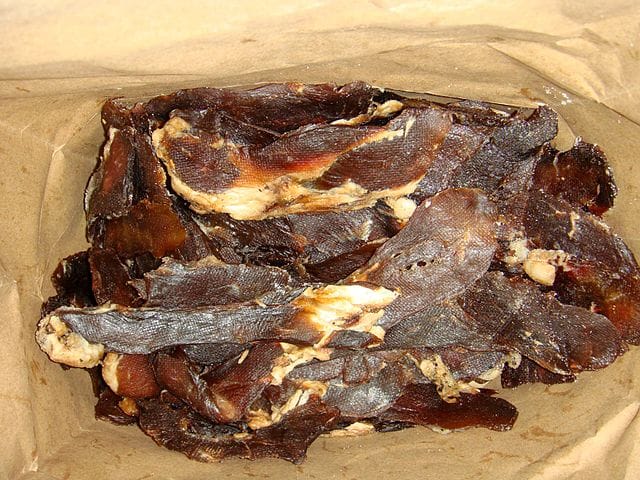 When it comes to topics for blogs posts, I tend to have a fair degree of fortitude (or at least I imagine I do). But I have to admit this one made me a little squeamish: “Jerky Juggernaut and the Power of Protein“.

This part was unsettling enough:

Sales have skyrocketed, with IRI forecasting that volumes this year will total nearly $1.5 billion, a hefty 46% increase since 2009.

This is disconcerting because my Spidey Sense tells me the same chi-chi haves who are ponying up to make jerky a 10-figure market are the same ones making the most noise about income inequality. And that, of course, raises the prospect that Bernie Sanders is likely to make jerky a plank in his Lunatic Fringe Platform. After all, if the haves (who are dead-set against creating opportunity for the have-nots to join their ranks) are spending their filthy lucre on jerky while shedding crocodile tears for the have-nots, where will the money come from that Uncle Bernie’s promising the have-nots to buy their votes? Have these jerky-gorgers no shame? (One imagines the Founding Fathers, deserting the graves in which they’ve been rolling over and showing up at the next Democratic Party presidential debate as vengeful zombies.)

But my dyspepsia became projectile cookie-tossing when the post veered from political derangement to political incorrectness:

Most of these new-age jerkies are geared to break out of the convenience-store ghetto, targeting mainstream supermarkets and hoping to attract a female buyer.

What? Did I miss the memo? Have the Thought Police disbanded? Oh, my Gawd! Elitism (slamming convenience stores), racism (ghetto), and sexism (hoping to a attract a female buyer) in the same sentence? We really are doing the herky jerky now, kids.

Maybe I don’t know all that much about convenience-store owners. For all I know, they might consider themselves occupants of the grocery-industry slums. I certainly don’t know all that much about racism. I’m a white boy. That’s fairly evident, even if you’ve never seen me dance. And I’m completely out of the loop when it comes to women and their predilections (or lacks thereof) toward dried, salted food products. (That’s right. Food products. Not meat products. Because jerky isn’t just for carnivores anymore.)

But elitism, racism, and sexism notwithstanding, I’d have imagined your typical consumer of jerky to be a little more macho.