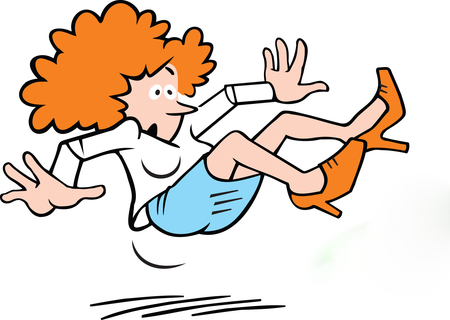 In 1999, I was working at a small public-relations firm in Avon, Connecticut. My dentist was in the next town east, which, oddly enough, is West Hartford. (Everything is relative.) Exiting I-84 on Prospect Street, I drove north on Prospect, intending to turn left onto Farmington Avenue, the street on which my dentist’s office was located.

At the intersection of Prospect and Farmington, I was the first to reach the traffic light. It was red. I stopped. I saw a woman step off the curb to my right, intending to cross Prospect Street. Appearing to have some physical and cognitive disabilities, she almost immediately lost her balance and began to topple, rolling to her right as she pitched forward, presumably in an attempt to break her fall. But her rolling caused her to hit the back of her head on the pavement when she landed.

Putting on my emergency flashers in the hope of preventing another car from rear-ending mine and pushing it into the woman and me, I jumped from my car, rushed to the woman, and knelt beside her. At that point, I realized two things: The woman apparently had some mental or cognitive disabilities, perhaps caused by her fall, because she wasn’t able to speak intelligibly. And she was bleeding profusely from the back of her head. In an effort to comfort her, I cradled her in my arms.

As luck would have it, there was a fire station diagonally across the street. An emergency crew had seen what happened and ran toward us with the requisite medical equipment. As soon as they reached us, I relinquished my place to one of the fireman, withdrew to my car, and went on my way. That’s when I noticed my forearms, exposed by the short-sleeve shirt I was wearing, were covered in blood.

Arriving at the dentist’s office, I approached the reception desk, attempting to keep my bloody forearms from touching my clothes. I said, “Is there some way I can get cleaned up?”

As the receptionist lifted her head, she gasped. I said: “Don’t worry. It’s not mine.”

She summoned the dentist and a hygienist, both of whom hustled me off into a room full of stainless steel. They positioned me over a sink and got hot water running from a spray head attached to a faucet. Each of them took an arm and began scrubbing me with Betadine, Hibiclens, and other antiseptic, antimicrobial concoctions, as if I were about to perform some high-risk, perilously delicate surgical procedure.

As they scrubbed, my dentist asked me what happened. I told him. Then he asked, “Why did you do that?”

The question hadn’t occurred to me before then. But since my dentist’s question deserved an answer, I thought about it for a moment … but no more than that. Then I said, “Because it was the right thing to do. And there isn’t a doubt in my mind that if I were the one lying on the pavement, most people would do exactly the same thing for me.”

My dentist smiled and handed me a towel. I dried myself off. He, the hygienist, and I headed for the exam room.

None of us lives in a state of hyper-awareness, ever-vigilant for the next disaster, the next crisis, the next opportunity to render comfort or aid. But all of us live with the capacity to render it.

You can tell me that capacity is not innate. It’s not reflexive. It’s not an inextinguishably better part of our human natures. If I listen to you at all, I’ll call bullshit on that every time. I’ve seen too much evidence to the contrary.

No one is more cynical or sarcastic than I can be. But that doesn’t preclude my knowing the difference between doing right things and doing things right. We all sense that difference, even if we can’t articulate it. We all act accordingly when called to. We do. We can witness the truth of that every day if we choose to.

As we passed by the receptionist on the way to the exam room, I couldn’t resist: I channeled my inner Ed Norton, held up my hands, and said to her, “Don’t touch me. I’m sterile.”

We laughed, happy with life and to share the living.