Don’t Be an ARSE 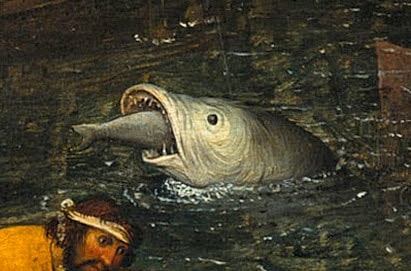 If you’ve witnessed the fate of successful brands (little fish) after they’ve been devoured by larger corporate entities (bigger fish), you’re aware that, regardless of what they eat, bigger fish excrete the same thing, all the time. Why the consistent waste?

Bigger fish suffer from Acquired Resource Squandering Endemic (ARSE), which predisposes them to the mistaken belief that eating smaller fish is necessarily prudent, advisable, and profitable. Here’s why:

So, large, hungry fish gobble up smaller, revenue-generating fish, without knowing how those smaller fish produced so much green. Because big fish don’t wonder what worked for the little fish, they can’t perpetuate it. The smaller brands begin their sad unraveling, leaving the big fish cutting bodies and expenses and wondering why that fresh, green asset depreciated so quickly.

What happens? Let’s say I’m mechanically ignorant (I am) and obscenely wealthy (I’m not). One day, I go the races and marvel at the pavement-scorching performance of a top-fuel dragster (I do). I can’t resist the urge to buy it, even though I don’t know my lug wrench from my super charger (I don’t).

I also don’t know this beast runs on a 90/10 mixture of nitromethane and alcohol. I fill the tank with recycled vegetable oil, leap into the cockpit, rev the engine, and dump the clutch in an attempt to pull a textbook hole shot. But my road rocket limps down the quarter mile at a halting, smoke-belching five miles an hour, leaving me stunned by its lack of performance.

“But it worked so well for those guys!” I exclaim before I haul the rail back onto its trailer and drive home trying to imagine how I’m going to recoup my investment in this underperforming asset (I’m not).

When Ben & Jerry’s was still privately held, I heard the founders interviewed on the radio. After viewing the company’s website and much of its collateral materials, the interviewer asked, “You’re a successful company with tremendous profits. But I don’t find financial information in any of your communications. They’re all full of your people. Why is that?” One of the two replied, “We learned a long time ago: You become what you count.”

If you’re going to play big fish, understand the asset you’re about to acquire. How and why does it run so well? What are its people like? What is its cultural environment like? How does it interact with its customers? How does it treat its employees? What’s important to it?

Every brand has a personality. That personality is the aggregate of the individual personalities that inform it. And it’s conveyed, celebrated, and perpetuated by what it counts.

If you don’t know those things going in, you’ll take it in the ARSE.