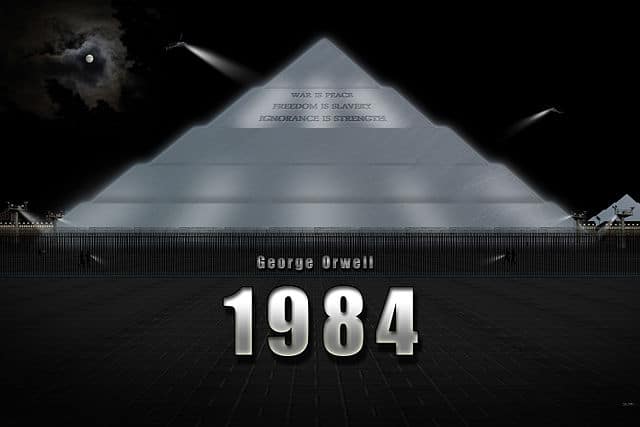 An ‘ideology’ is like a spirit taking up its abode in a body: it makes that body hop around in certain ways; and that same body would have hopped around in different ways had a different ideology happened to inhabit it. (Kenneth Burke, 1897-1993, from Language as Symbolic Action: Essays on Life, Literature and Method)

There are no accidents. The death of empiricism has made it eminently more difficult to construe, let alone demonstrate, causal connections. Nevertheless, some things are significantly more coincident than coincidental.

Case in point: I came across a book by Dan Lyons — Disrupted: My Misadventure in the Start-Up Bubble — shortly after I finished re-reading George Orwell’s 1984. You can tell me that’s accidental. But I won’t buy it. Consider the similarities in these two passages:

Exhibit A: “Arriving here feels like landing on some remote island where a bunch of people have been living for years, in isolation, making up their own rules and rituals and religion and language—even, to some extent, inventing their own reality. This happens at all organizations, but for some reason tech startups seem to be especially prone to groupthink.” (Dan Lyons)

In both of those citations, uniformity and homogeneity are hidden under the guise — masked by the illusion — of creating rules, rituals, religions, languages, systems of codification, and regimens of indoctrination. But no such creating is taking place. Rather, all those rules, rituals, religions, languages, systems, regimens were created a priori. All the new arrivals do, all the masses do, is adopt. While conformity becomes the norm, it’s a safe bet two of the verbs in the prescribed language will be innovate and disrupt. It’s an equally safe bet that one of the senses no longer permitted in these invariant environs is irony.

What’s that? This is NOT about prescriptive conformity? Au contraire:

Exhibit C: “The code depicts a kind of corporate utopia where the needs of the individual become secondary to the needs of the group—“team > individual,” one slide says—and where people don’t worry about work-life balance because their work is their life.” (Dan Lyons)

It’s a little tough to make a case for creativity and individualism in circumstances in which the needs of a group, any group, trump the needs (or creative urges) of any individual; in which team = individual; and in which unconsciousness is valued over thinking. And in addition to groupthink, the very notion of team equating to individual is a stark manifestation of doublethink:

Exhibit E: “What we’re creating is not spam. In fact, the official line is that [we hate] spam and [want] to stamp out spam. We want to protect people from spam. Spam is what the bad guys send, but we are the good guys. Our spam is not spam. In fact it is the opposite of spam. It’s antispam” (Dan Lyons)

Exhibit F: “Doublethink means the power of holding two contradictory beliefs in one’s mind simultaneously, and accepting both of them.” (George Orwell)

The fact that we’ve adopted ideology over ideation is why the world is aflutter over Big Data, without being able to define it, harness it, apply it, cull it, analyze it, or do anything else other than get in line behind it (blindfold optional). It’s why inbound marketing, digital marketing, content marketing, experience marketing, marketing automation, et al. continue to spawn purveyor after purveyor of these technological chimeras, all of whom are only too happy to take the good money we keep throwing after bad in pursuit of The Next Big Bonanza. (“I’m telling you, Dude. This is IT!”)

To paraphrase Dr. Martin Luther King, Jr., we may have all come on different ships, but we’re in the same ideological boat now, kids. So, to paraphrase Kenneth Burke, jump around.

Welcome to the the Brave New World.

—
Image by Jordan L’Hôte (Own work), via Wikimedia Commons.