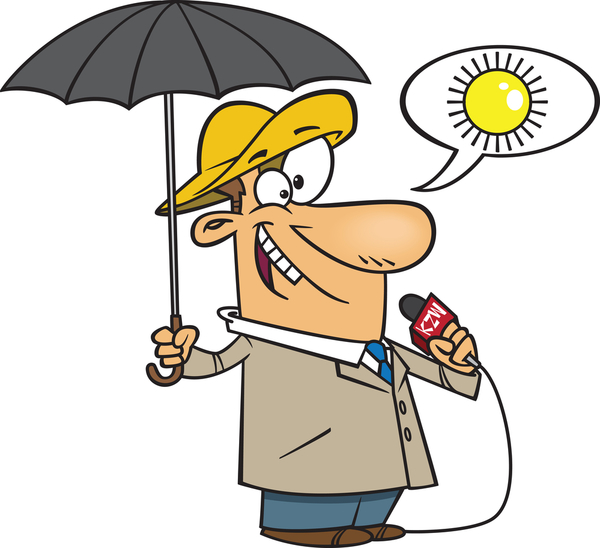 I was listening to a podcast the other day. Hosted by a local news and sportscaster, the podcast featured a local meteorologist. Said meteorologist had formerly been the Chief Meteorologist at one of the local TV stations, until he committed the cardinal sin of making too much money. At that point, he was, as we say in the biz, summarily greased.

That, of course, could have invited the philosophical question: Who the hell agreed to pay our meteoroligist friend all that money in the first place?  But this isn’t a philosophical inquiry. It’s a linguistic one.

Speaking of language, you might also wonder why people who analyze, predict, and report on the weather are called meteorologists, as opposed to, say, cloudologists, skyologists, precipitologists, or even weatherologists. I can’t say for certain. But I believe it’s because these folks are out there — I mean way out there.

You may recall that I was listening to a podcast the other day. During the podcast, the hosting news and sportscaster was lobbing meatballs to the meteorologist about the weather we might expect over the ensuing week or so. The meteorologist, Herb (not his real name) said to the news and sportscaster, Chuck (not his real name, either), “Well, Chuck. We’re going to have a liquid rain event.”

Alas, Chuck went right along with Herb, unquestioningly, as if he were a meteorologist, too.

Lest you think I pick on Herb unduly, fear not. There’s plenty of vapid inanity to go around. Here’s another thing that seems to be idiomatically consistent among all meteorologists, or at least the ones who practice here in Connecticut:

We have two interstate highways that intersect in Hartford — I-91, which runs north and south, and I-84, which runs east and west. If there happens to be some upcoming precipitation in the vicinity of either of those major thoroughfares — or if the path of any weather system happens to be roughly north or south, or roughly east or west — our local meteorolgists will say, “We’ll be having a liquid rain event along the I-91 (or I-84) corridor.”

That’s the point at which I grab the phone, call the station from which the metorologist is broadcasting, ask for the weather desk, and begin my investigation:

I think we’re safe with the blanket presumption that meteorologists will continue to spend their time preoccupied with bodies and phenomena sigificantly beyond our atmosphere. In that case, I have the perfect thing.

There’s an App for That

I’ve developed an app that works on all Apple and Android devices. It’s the Accu-Window Weather App. All you have to do is load it on your device, call it up whenever you want to know what the weather’s like, and stick your head out the nearest available window.

You can download the Accu-Window Weather App from my website at http://igotyourliquidrainrighthere.com. Or you can call 1-800-WTF-OVER to have the app texted directly to your phone.

Get yours now. Otherwise, meteorologists won’t be the only ones who are all wet.