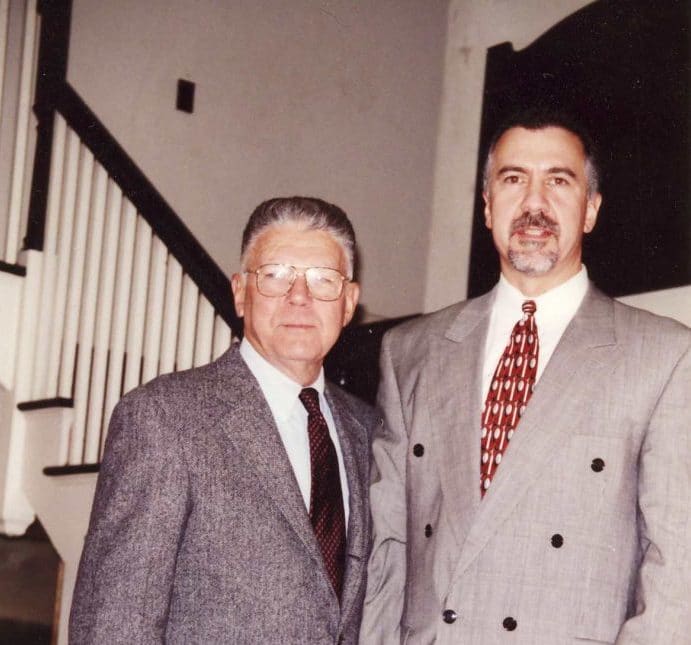 My father passed away a year ago today. To say the occasion was life-changing is to do it — and my father — a disservice. It was more like a revelation — a precious, bittersweet reminder of who I am and why: I am my father’s son. All I am I owe to him.

His courage was as unflagging as his integrity was inviolable. His leadership was as exemplary as his generosity was unbounded. He revered work, disdained half-hearted efforts, and refused to even acknowledge the word, quit.

When the doctor in the ER told us my father was gone, I wanted to say: “I’m sure the man you were working on is gone. I’m so sorry. But it’s not my Dad. That’s not what he does.” I didn’t. I acknowledge his passing. But I can’t grasp the reality of it.

People have told me God speaks to them. In response, I did what any sarcastic Irishman would do: I ridiculed them. So, I admit sheepishly that before Dad’s passing, God began speaking to me. That was unexpected enough. But his level of familiarity disarmed me. I didn’t assume he’d call me Sir. But I thought he’d at least refer to me by name. No. He called me Dude.

When he spoke to me, he always asked the same question: “Dude. Are you paying attention?” He asked it every time I listened to this song … in my office … in my living room … in my car … repeatedly in the week before Dad passed. He asked it the morning after Dad passed when I found this:

Down near the bottom
of the crossed-out list
of things you have to do today,between “green thread”
and “broccoli,” you find
that you have penciled “sunlight.”Resting on the page, the word
is beautiful. It touches you
as if you had a friendand sunlight were a presenthe had sent from someplace distantas this morning—to cheer you up,and to remind you that,among your duties, pleasureis a thingthat also needs accomplishing.Do you remember?that time and light are kindsof love, and loveis no less practicalthan a coffee grinderor a safe spare tire?Tomorrow you may be utterlywithout a clue,but today you get a telegramfrom the heart in exile,proclaiming that the kingdomstill exists,the king and queen alive, still speaking to their children,—to any one among themwho can find the timeto sit out in the sun and listen.

From the age at which I was old enough to know anything, I couldn’t imagine my life without my father in it. I was right about that. I was equally sure, when he passed, his presence in my life would be diminished. I was wrong about that.

When we walked into the room in which he’d expired — even before pulling back the curtain that concealed his body — Dad’s presence was stronger than ever. He was there. He’s here. He’s always here. He always will be.

It was as if he were asking me if I really believed he’d fail me. No. Never. He does, however, want to be sure I’m listening. He wants me — all of us — to find the time, to make the time, to sit out in the sun and listen.

I don’t know what it is about sunlight that makes one’s hearing so much more acute. But it does. If you sit out there long enough, you just might hear God talking to you. And if you listen carefully enough, I know you’ll hear my Dad. He was spirited enough to talk to anyone in this life. He didn’t change in the next.

Whatever he says, it’s a safe bet he’ll be trying to help you. That’s what he does. He doesn’t quit. No. Never.

Dude. Are you paying attention?