Once and For All 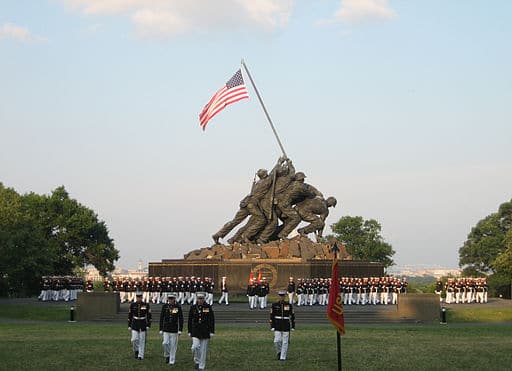 A few years ago, I was boarding a flight from Hartford to Atlanta. The weather was cold. So, as soon as the announcement was made that, in the interest of preserving space in the overhead bins for luggage, no coats should be placed in them, most of the people on the plane stuffed their coats in the overhead bins to ensure the flight would be delayed and their fellow passengers inconvenienced as much as possible. As a result, a young man had no room to stow the valise he was carrying. Some commotion ensued as the young man refused to check the valise and have it put in the cargo hold. After some wrangling, he prevailed and was able to keep the valise in the cabin.

After the hubbub subsided, it turned out his seat was next to mine. When he was settled in, I told him I was sorry for his trouble. He explained that he was a Marine, assigned to a unit that was periodically ordered to audit Marine bases in various parts of the world. I asked what he was carrying that we so important. He said he had no idea what was in the valise, couldn’t know until he reached his destination, and wasn’t allowed to let the valise leave his possession or control.

As he settled in with a magazine, I said, “My father’s an ex-Marine.” He said something quietly enough that I didn’t hear him.

“There’s no such thing,” the young Marine replied a little more loudly and with a hint of exasperation but without looking up from his magazine.

At that point, the young man looked up at me as if he felt sincerely sorry for my having to live my life in such an apparently dense fog. “How old is your father?” he asked.

“He does,” I said as I smiled and shook the young Marine’s hand.

Since you could land a helicopter on my father’s flattop until the day he passed away, I finally learned, once and for all:

Once a Marine, always a Marine.

—
Image by Ketone16 (own work), public domain, via Wikimedia Commons.