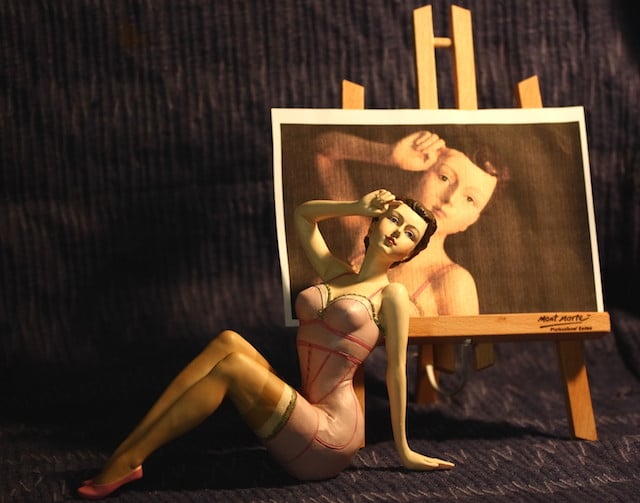 The Dumbing of America preceded television programs like Jerry Springer, Oprah, The View, Real Housewives, and every other broadcast and popular-culture offering that indicates the decline of Western Civilization and reduces the public discourse to the level of superficial puerility. But the use of advertising as a means of starting conversations about special interests — and indelicate ones at that — is a rather recent and mindlessly contemptible phenomenon. Case in point:

Someone recently shared an article with me (why?!), subtly entitled: “American Apparel stirs up controversy for giving storefront mannequins pubic hair“. Its spectacular distaste ran neck-and-neck with its presumptuous ignorance. It said this, in part:

American Apparel has stirred up quite the controversy for decking out its mannequins with very visible patches of untamed pubic hair … clad in transparent white underwear, exposing their unkempt bikini lines … it is intended to start a conversation about society’s concept of feminine beauty … the display is meant to ‘bring rawness and newness to a holiday thought of as a romantic Hallmark holiday. . . by exploiting the lust of Valentine’s Day.’

We’ve come a long way, Baby. And the journey’s taken a few turns for the perverse.

Advertising has always been a reflective medium, showing back to us our myriad predilections for all things consumable. It’s always been a bellwether for all manner of trends, fashions, tastes, and preoccupations. And it’s been, at times, provocative. But starting conversations? I don’t think so — at least not meaningful ones.

When did feminine beauty become equatable with untamed pubic hair and unkempt bikini lines? Are those the measures of feminine beauty? According to what shallow nitwits? And if so, where’s the hue and cry from Gloria Steinem? Where’s Gloria Allred? Where’s Sandra Fluke?

Is it absolutely necessary to bring rawness and newness to a holiday thought of as a romantic Hallmark holiday? Why? Wasn’t Valentine’s Day insulting and superfluous enough already? Did its pandering, commercial shamelessness really need to be augmented by gender debasement? Most important (at least presumably), will American Apparel actually sell more of whatever the hell it’s selling because it’s shown us unkempt bikini lines?

We’re in deep trouble, kids. We seem to be blithely following each other down an increasingly slippery slope of defilement, denigration, derogation, and trivialization. We seem to be transforming sacred and profane into distinctions without differences. We seem to be accepting new lows in decency, even as we reach new heights in cheapness, obscenity, and vulgar titillation.

On the other hand, that perception may be wrong, if not old-fashioned, conservative, myopic, immature, prudish, or repressive. Since any of those is a possibility, we’re hedging our bet by creating a new advertising campaign for Antivert Oral.

Its motif? We’re going to use real models on constant rotation in storefronts, all of whom will be regurgitating violently. Its purpose? To start a conversation about society’s concept of retroperistalsis and to bring rawness and newness to a traumatic condition from which all of us suffer periodically but which is minimized by euphemistic references to it such as honking, blowing lunch, blowing chunks, or tossing your cookies by exploiting our inexplicable lust for rubber-necking at the grotesque.

Have we really sunk so low? Yes. We’ve established that. Now we’re merely trying to gauge the depth.

—
Image by wallyir, courtesy of morgueFile.com.