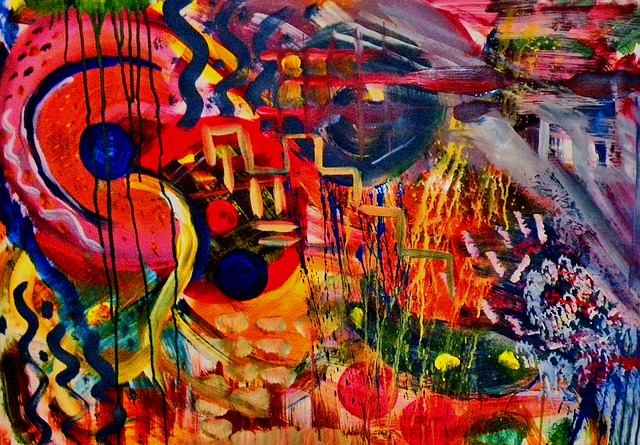 I saw two things the other day that got me thinking about the ways in which we’re stripping sense and meaning from our communications.

The first was this post: “You Think You Speak Digital?” It pointed out, unwittingly of course, that we’re failing at communicating with language, let alone with binary digits. The second was a series of videos on YouTube showing painters of abstract impressionistic art at work. The videos pointed out, with equal lack of intent, that sense and meaning are becoming increasingly subjective. Accordingly, since we don’t have to communicate sense and meaning, it doesn’t matter what the hell we mean, even if we don’t know what we mean — or even if we don’t mean anything at all.

(As an aside, that lack of sense and meaning may actually be art, regardless of whether it’s linguistic or visual, because it constitutes a perfect circle of self-absorbed vacuity.)

To create the work in progress that I’ve generously shared above, I lined up a row of opened paint cans in front of my canvas, which covered an entire wall. I dropped a grenade behind the paint cans. (The work needed a hint of nihilism.) Then I ran like hell. (I needed a hint of self-preservation.)

After my assistant cleared the wreckage, I had him lead me into the room blindfolded and put a brush in my hand. Once I was sure he’d left the room, I started articulating random swirls, shapes, and gesticulations in the general direction of the canvas, which was randomly splattered with paint and haphazardly perforated with shrapnel holes. (Since it is, after all, abstract impressionism, the work needed a hint of man’s inhumanity to man.)

Once I put the finishing touches on the painting, I’m going to call it Grandmother’s First Wedding — or Flugelhorn In Repose. I haven’t decided. It won’t matter anyway, since the title will make no more sense or convey any more meaning than the work or the words I’ve written to describe it.

Everything’s FUBAR. But at least we’re happy about it.

—
Image by Letiha, courtesy of pixabay.com.