The Father of Invention 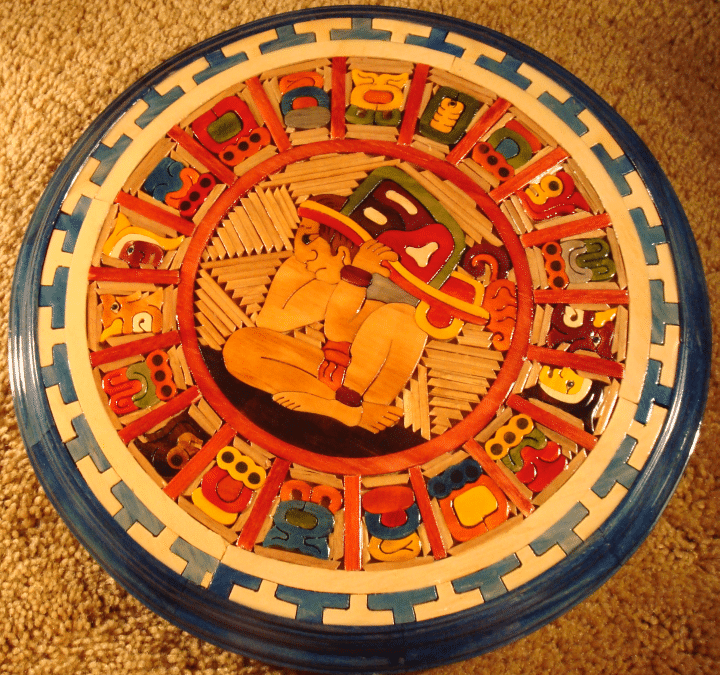 Necessity is the mother of invention. (variously attributed)

Historians are inching closer to consensus on the notion that if necessity is the mother invention, recreation must be the father of invention. While all of history has manifested evidence of males’ gender-related predilections for leisure activities (how else to explain curling and Fireball?), more recent studies have focused on the Maya — the Mayan Calendar, in particular — and their cultural relation to the flying disc, a recreational object more commonly know as the Frisbee.

Credit for the invention of the flying disc is popularly attributed to the practice of Yale students, who took to throwing pie tins from the Frisbie Baking Company of Bridgeport, Connecticut. But geological and anthropological research has unearthed evidence of a flying disc that predates the founding of that establishment by roughly 1,200 years. By way of evidence, compare the Mayan Calendar at the top of this post with the patent drawing for the Frisbee that appears here. I rest my case.

As further evidence, consider the fact that the Mayan Calendar was chiseled from stone. It would have required the testosterone-fueled strength of a man to throw the thing at all, let alone to give it sufficient wrist-torque to keep it stably spinning during flight. And since dogs are man’s best friend, the proliferation of toothless canine mandibles excavated from Mayan archeological digs proves men were throwing these stone Frisbees to their dogs as early as 3,114 BC.

The point is all but moot anyway, since there’s little evidence women would have stooped to involve themselves in the recreational throwing of tins, calendars, or anything else, let alone engaging in any other form of pie-related tomfoolery.

We’d like to know what you think. Is recreation the father of invention? Please tell us in the Comment box below.

“MayanCalendar” by Truthanado – Own work. Licensed under Public domain via Wikimedia Commons