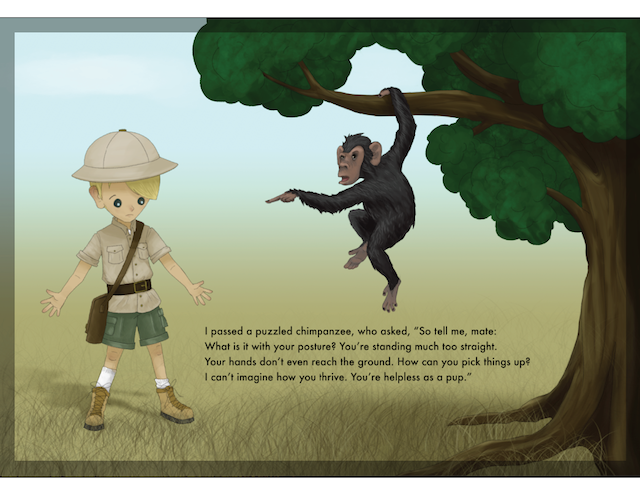 I’ve added to my fledgling collection of books for children by authoring another one, entitled The One and Only Ben. It’s being illustrated by a multi-talented young woman, Shelley Shaw. The image above is the first illustration Shelley created for the book.

In brief, the story is about a boy, Ben, who goes into the jungle to observe the animals, only to find they’re observing him — and harshly judging him in the process. On the way out of the jungle, crestfallen and despairing over his seeming shortcomings in relation to the animals, Ben meets a wise old lion who redeems the experience, assuring Ben of his singular worth by reminding him of all the blessings, gifts, and capabilities he possesses that no other creatures possess.

Fast forward to last month: With no apparent connection whatsoever to The One and Only Ben, I had the opportunity to be appointed to the Board of Directors of Literacy Volunteers Valley Shore (LVVS). Because it’s my job to write (rather than to be awake, aware, or insightful), the serendipitous relationship between the two had to be pointed out to me: LVVS is helping people find their ways out of the figurative jungle through literacy and language skills. And people say I’m slow …

That revelation was another powerful reminder of the power of words, of linguistic expression, of the facility so many of us take for granted, if not abuse.

Language is a light. It’s the luminescence by which we share with others what we think and feel and know. It’s the messenger of conscience. It’s the tool by which we differentiate wrongs from right, facts from fancy, promise from principle. And, so, especially in the Age of Political Correctness, it’s an agent of risk:

To create today is to create dangerously. Any publication is an act, and that act exposes one to the passions of an age that forgives nothing. (Albert Camus, Resistance, Rebellion, and Death)

Create anyway. Take the risk. Face the danger. Write. Share. Publish. Expose yourself to the passions of the age. It’s the only way out of the figurative jungle.

I thanked the wise old lion, and I held my head up high.
I walked out of the jungle, and I cried out, “Who am I?
I’m Ben — the one and only Ben — there’s no one else like me!
No one thinks what I can think or sees what I can see.”

And so I hope that all of you who read my book recall
That you have blessing, gifts, and dreams. Please hold on to them all.
In all the world there’s just one you — the one and only you.
Believe in that, and you will see there’s nothing you can’t do.*

—
* From The One and Only Ben, © 2015 by Mark Nelson O’Brien, all rights reserved, registered with WGAE.