The Long, Painful Death of PowerPoint 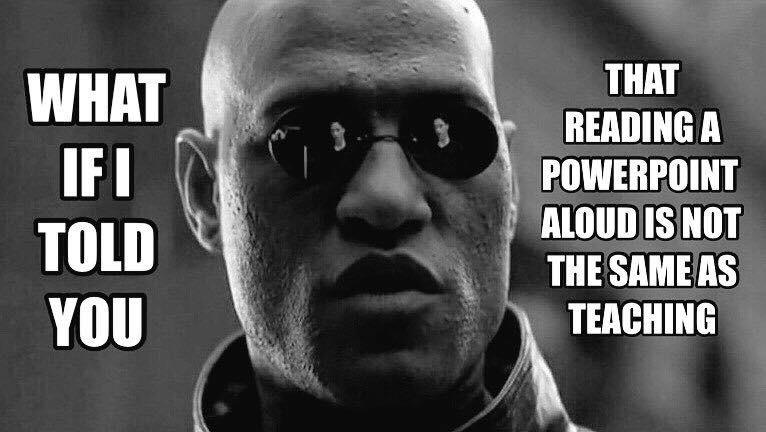 It finally happened: In a recent Discovery Session with a new client, the client said, “We need you to create new presentation materials for us. But we don’t want you to use PowerPoint.” I don’t know what unnerved the client more — the fact that I wept openly or that, after composing myself, I strode around the conference table, kissed him full on the lips, and asked him where he’d been for the last 32 years.

That’s right. Thirty-two years. Believe it or not, PowerPoint has been around since 1987. If you’re anything like me, you blamed Bill Gates for it. But all he did was buy it, popularize it unto ubiquity, and, thereby, put it in the hands of every unimaginative would-be presenter around the world. What an accomplishment.

I came from the Corporate Dark Ages before PowerPoint, in which creating presentations meant:

PowerPoint, of course, changed all that. It enabled your boss to put you through an endless repetition of steps 1 through 7 without the poor schlep from Corporate Communications and the chargeback. And it ushered in, ultimately, what’s become knows as …

The Teleprompter School doesn’t believe in presenting, in knowing the material that should otherwise be presented in a personally interactive way, in engaging the audience in any direct way, or in giving the audience any way to meaningfully relate to the presenter. Rather, it espouses the practice of treating PowerPoint slides as if they were teleprompter screens, with the stooge at the podium reading each one as if the members of the audience are functionally illiterate cretins with inexhaustible attention spans.

It also adheres to the notion that each slide should be as fully packed as possible, preferably with bulleted content in minuscule type sizes, because the only thing better than reading complete sentences to a brain-dead audience, of course, is reading them impossible-to-follow sentence fragments. That’s why, if you follow the money, you’ll find that most devotees of the Teleprompter School are heavily invested in the pharmaceutical industry, particularly in amphetamines.

This approach to giving presentations borrows its name from Method acting, in which actors giving performances pretend to be real people performing for other real people. Like actors who’ve learned their lines, presenters from the Method School actually know their material before getting in front of their audiences. They treat the members of their audiences as real, sentient beings, rather than as inanimate objects. They speak directly to the members of their audiences, seemingly extemporaneously, making eye contact with people as they speak, rather than keeping their heads turned toward and their eyes glued on the slides from which they’re reading.

Most important, to borrow a phrase from football, presenters from the Method School read the defense. Because they’re awake, and because they give their audience members credit for being so, they give their audience members time to respond to the content of their presentations. They read visual cues. They invite questions. They engage in dialogue. They allow for the semantic differences between the verbs present and force-feed. The act as if they’re real people interacting with other real people.

So, based on the recent experience of my Discovery Session, it appears as if PowerPoint may be, at long last, ready to have its ticket punched. I don’t know that it’ll be embalmed because it’s hard to imagine anyone (other than devotees of the Teleprompter School) wanting it to be preserved. It might have some value as a cautionary cultural artifact (“Don’t let this happen to you!”); otherwise, it should be permitted to just go away quietly and leave us alone.

Regardless of what ultimately happens with or to PowerPoint — whether you belong to the Old School, the Teleprompter School, or the Method School — here’s a rule of thumb for effective communication:

If you have something meaningful to say, you don’t need a slide to say it for you.