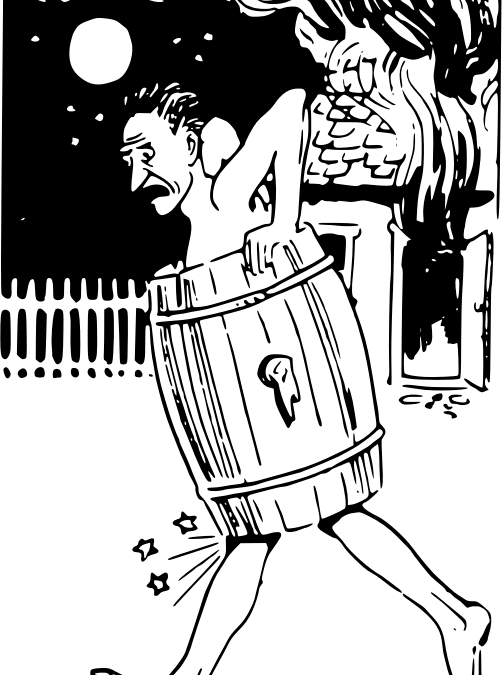 ZEPHYR COVE, Nev. — A 53-year-old man was arrested on suspicion of being naked near a high school on Lake Tahoe’s east shore … after three Whittell High School students reported spotting him tied to a rock and lying face down behind the school. When the students asked if he needed to be untied, the man answered no. Douglas County sheriff’s deputies said the man told them he was watching some buzzards flying overhead at the time. The man, who said he was a freelance writer, was arrested on a charge of loitering on school grounds.

I’m one of those apparently rare people who could not be suspected of being naked. I’m either clothed, or I’m not. Maybe that’s why I think the story above demands a healthy skepticism and a full measure of compassion.

At the outset, there’s a discrepancy between the grounds for the man’s arrest — suspicion of being naked — and the fact that three students said he was, indeed, naked. So, the dude either was suspected of being naked, or he was naked.

Which is it? How difficult could it have been to tell? I’m not saying my own experience is a necessary barometer here; but every time I’ve been suspected of being naked, I’ve been naked.

Then there are the circumstances under which the poor guy was found. This is exactly why I’m no longer naked — ever — when I tie myself to a rock. I don’t know precisely when the act came to be so profoundly misunderstood by so many. But you’ll just have to trust me: this is a practice as innocuous as the day is long.

I used to tie myself to rocks in all manner of public places — school yards, parks, street corners — and no one would bat an eye, let alone call the police. I once tied myself to the Tucson Meteorite in the Smithsonian. I’d only meant to be there for a few hours, but the security guards brought me coffee and donuts for three days. We actually grew quite close. Alas, those days are gone.

Another thing: I don’t know how many hardcore buzzard-watchers there are out there. But all of us who practice the art can tell you it’s a source of dizziness like no other. One need not tie oneself to a rock to maintain balance; however, studies have shown that doing so significantly reduces the incidence of teetering, stumbling, and falling that can result from staring straight up for hours on end, watching the big birds reel and swoop.

And much will be made of the fact that the man was discovered facedown. That’s to be expected from a population of media hacks and law-enforcement personnel largely comprising avowed non-buzzard-watchers. Among ornithological specialists, buzzards are notorious for their shyness. Buzzards will go into hiding for weeks, going without food or bio-breaks, if they even suspect someone might be looking.

The trick is to pretend you’re actually watching worms. Then, when you hear the flutter of wings and the whoosh of the bird overhead, you turn your head slowly and carefully, opening just the exposed eye ever so slightly. The difficulty of this practice is offset by the fact that buzzards also happen to be extremely gullible. They not only fall for the worm-watching trick every time, they love to listen to politicians and to have quarters pulled from behind their ears.

I have several large rocks in my yard, each of which provides an opportunity to lash myself to it, without fear of reprisal, retribution, or incarceration. But even there — in the privacy of my own little piece of the planet — I no longer engage in the practice au naturel. It’s simply not worth the risk that the mailman or old Mrs. Anderson from next door might show up, leaving me to end the day in shame, handcuffs, and an orange jumpsuit.

The buzzards stopped coming by once I stepped down from public office and ran out of quarters. But I’m learning to adjust.

As our unfortunate friend from Zephyr Cove now knows, it’s harder to live in the world once you know the naked truth.