The Wonders of Technology 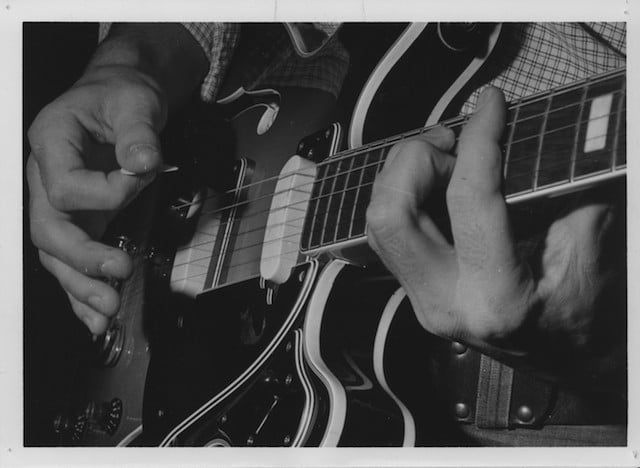 I read an article in Quartz that gave me pause: “People With Tattoos Report the Apple Watch is Having Trouble Determining They are Alive“:

A few early-adopter Apple Watch owners complained that they seemed to be having issues receiving notifications on their watches. These watch wearers had tattoos covering the area where a watch would sit on their wrists.

It can be plausibly argued that people who buy any first-generation anything are brain-dead. But I imagine finding oneself with a conspicuous absence of vital signs might be profoundly disturbing. The article made me recall a couple of other technology-related phenomena:

When I was in high school, I had braces on my teeth. I also played guitar. (Those are my hands in the photo above, which was taken during my high school days.) If environmental conditions were just right, I could plug my amp into an AC power supply, plug my guitar into the amp, put my hands on the strings of my guitar, stand in front of a microphone, open my mouth, and hear AM radio programming coming through the PA system.

My bandmates were always trying to tune my braces to see if we could get some of the independent, AOR FM stations that were springing up at the time. But we invariably had to settle for the local news, sports, or Top 40 stations that proliferated on the AM band. It was frustrating, to say the least.

Remembering that frustration put me in mind of a more recent story, that of Gary “Area 51” McKinnon, a Scottish systems administrator, accused in 2002 of perpetrating the biggest military computer hack of all time.

McKinnon has repeatedly claimed to have been looking for evidence of UFOs and “free energy”, a mythical, inexhaustible source of power, on the military computers. According to McKinnon, he did in fact locate that evidence.

We could have used a guy like Area 51 when I was in high school. With his free energy source, my bandmates and I could have foregone the AC electricity. And the UFOs would have made some wicked props for our stage show. We’d have had to do without AM radio. But it would have been a small price to pay.

Life, after all, is about tradeoffs.