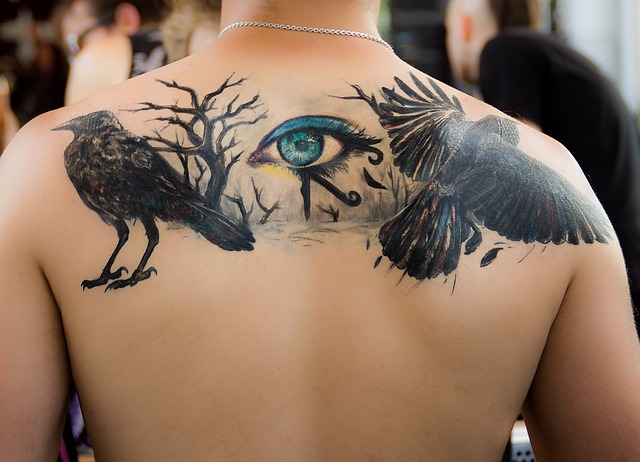 For a second there, I thought it was 2016. Then this yanked me back to reality: “Here’s what hiring managers REALLY think of your tattoos” (WARNING: Exhausting infographic to follow.)

That’s right. In whatever year this is, evidently some people are still getting their knickers in a twist about skin ink, with hiring managers apparently topping the list. Given all the other things one might imagine they have to worry about — like qualifications, aptitudes, abilities, resumé accuracy, compensation packages, and wrongful discharge suits (is that a tattoo under your sleeve?) — you wouldn’t think there’d be time, superficiality, or rushes to judgment enough to also worry about body art, would you? You’d be wrong:

A whopping 37% of HR managers cite tattoos as the third-most-likely physical attribute to limit career potential.

This rampant tat-aversion reminds me of a story, as absurd when it took place almost 20 years ago as it certainly is today:

In the late ’90s, I worked at a small public-relations agency. The agency was run by two sisters, both intelligent and a tad repressed, both self-professed social liberals. The young administrative assistant who’d worked at the agency for a while gave her notice, letting it be known she intended to go back to school to finish a degree. Sad to see the admin go, the sisters started interviewing to fill the position.

One of the candidates was a woman, probably in her early to mid-30s — pleasant, poised, polished, principled, and highly qualified — who arrived for the interview conservatively dressed in a navy blazer, a gray pleated wool skirt, and tasteful pumps with modest heels. The sisters were sure they’d found their new admin … until the woman crossed her legs, revealing a discreet butterfly tattoo on her right ankle. She was shown the door faster than Bill Clinton at a lingerie party in a sorority house at a Catholic girls’ college.

The sisters, instead, hired Aphrodite (not her real name), a voluptuous young woman prone to wearing tight jeans and tighter sweaters. Early in her tenure, she arrived at an agency-wide staff meeting carrying a hand-made ceramic coffee mug, the handle of which was some manner of exotic but oddly threatening lizard.

“A friend made it for me,” Aphrodite replied helpfully. “Wanna know why?”

“Sure,” I replied innocently.

With that, Aphrodite rose from her chair in full view of everyone in the room, grabbed the hem of her sweater in both hands, and, without hesitation, hiked it up over her head. There slithering down from the cleft of her ample bosom and disappearing beneath the waistband of her imagination-eliminating jeans, was a tattoo of the lizard whence the mug handle derived.

As a former hospital orderly, I was well-versed in CPR. I immediately set about resuscitating the elder of the Uptight Sisters. While two of the other men in the agency continued to study Aphrodite’s … uh … attributes, the fourth grabbed the defibrillator from the crash cart and shocked the younger sister back to viability. Sensing the commotion, Aphrodite pulled her sweater back down; the four of us of the male persuasion resumed our seats, turning to clean sheets in our notepads; and the Uptight Sisters wrestled with their composure as they came to grips with the fact that Aphrodite, her lizard, and her ink were there to stay.

I’m not sure why hiring managers share the stodgy hang-ups of the Uptight Sisters. But if they get over their tattoo aversions, they may find more qualified candidates.

And if they’re not careful, they just might enjoy themselves.

Image by darkmoon1968, courtesy of pixabay.com.