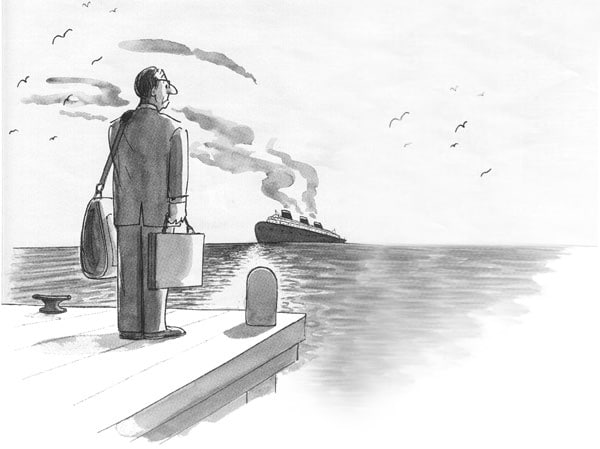 The other day, I saw the LinkedIn profile of a person who’d given himself the title, Freelance Conceptor. When I saw it, I thought, as Robbie Robertson says, “Oh, this is sure stirrin’ up some ghosts for me.”

Contemplate that for a moment. For that matter, just consider the notion: Freelance Conceptor. The term alone is enough to make one feel instantly liberated — unfettered by form, structure, convention, constraint, or allegiance to any rule, norm, or orthodoxy. A brain for hire. A free-agent thinker. An independent sage. An unaffiliated savant. A Utopian ideal of one — unbound, unregulated, unlimited. Ah, the aimless, amorphous intellectual license of it all.

It’s a role that could have been mine, had I recognized the opportunity in its fleeting manifestation, at whatever point it fleetingly manifested. My heart thrills at the very thought, even as it aches at the sobering realization that I missed it. And the ache gets worse: Freelance Conceptor is just one of two things I might have been, had I possessed the courage and the foresight to have been them. The other one is plumber.

That’s right. I also might have been the custodian of lavatories and loos, of sinks and drains, of ballcocks and bidets, of traps, tee fittings, and trip levers. All it would have taken was the existentially devil-may-care conviction that I was going to face life’s excrement head on.

What would there have been to lose? We all have to deal with the crud anyway. Rather than avoiding it, running from it, turning my head and holding my nose, I could have dived right in. There would have been something manly, noble — nay, heroic — in opting to encounter the slop directly, hands-on, elbows-deep. And there would have been a particularly piquant, poignant pleasure in the fresh-scrubbed cleanliness that would have followed each deliberate dive into the filth. Dang!

But what do we know in the limited imagination of youth? In our formative years, we’re not quite idealistic enough to envision ourselves as freelance conceptors. And we’re not quite pragmatic enough to conceive of ourselves as feculence functionaries. So we adhere to our meandering paths, doing our best to read the signs along the way. As we go, we count our contentments with each thing we achieve.

If we worried about every boat we missed, it would be a long, miserable life.