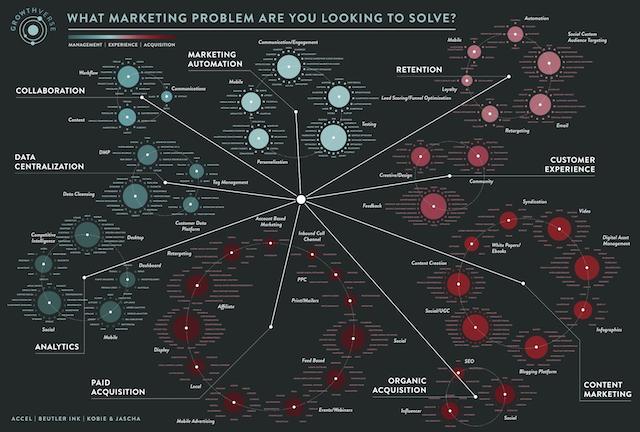 I know what you’re thinking: “This can’t be Hell.” I’m sorry. I know it’s not what you expected. There’s a bunch of stuff missing. There’s no eternal conflagration. There are no devilish dudes with horned heads and menacing pitchforks. Beelzebub puts in an occasional appearance. But he’s nowhere near as ubiquitous as we’ve been led to believe by mythology, literature, and religious tracts or treatises. But you’re just going to have to trust me on this one. It is, indeed, Hell.

And, yes, I know it’s surprising that Hell doesn’t comprise a single circle. Not one, let alone nine. Instead, as it turns out — and I’m sorry about this, too — Hell is a mind map. It purports to illustrate the various aspects of contemporary, technological, utterly impersonal, and completely disembodied marketing. (How Hellish is that?) It’s as chaotic a thing as you’ve ever dared imagine — or about which you’ve ever screamed and sweated through nightmares. And it’s a hideous manifestation of every grotesque possibility that hyperinformationalism hath wrought. Welcome to 21st-century marketing, kids.

The graphic above isn’t any of those things. Simple? No. Comprehensible? Uh uh. Persuasive? I don’t think so. Memorable? Not a chance (unless you count the ways in which nightmares are memorable). It was created for its creators. You can bet they were duly impressed by and righteously pleased with themselves. And you can bet they never gave a moment’s contemplation to the only question that mattered: Who gives a damn? And if a guy as detached from reality as the Cannes-jetting Dick Edelman gets it, you know we’re in deep trouble, kids.

The good news is we’ll likely never have to sit through a presentation of that infernal graphic, in which some know-it-all who wants us to buy the concept (and his services) would no doubt regale us with pretentious pomposity about all the ways in which technology has enabled collaboration, automated marketing, helped retain customers, optimized the customer experience, leveraged content marketing, organically acquired new leads, integrated those leads with paid lead lists, analyzed the myriad marketing data spit out by the technology, then stored it in a centralized repository.

The bad news is we’ll never get to see that skinner’s world-class speed as he sprints for the door in response to the query: “How many of those inbound leads will be viable sales prospects?”

Good grief. Marketing should be simple. Welcome to Hell.