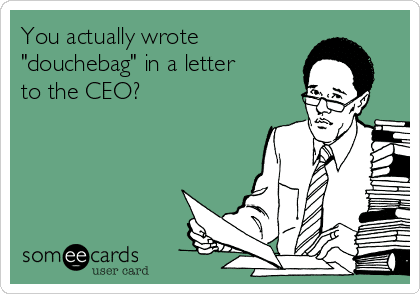 At risk of having you think I doth protest too much, I’m not prudish, at least as far as language is concerned. Truth be told, my language is, on occasion, salty enough to float rocks. But I, nevertheless, do try to maintain a modicum of linguistic decorum in professional settings, particularly as it pertains to writing … and especially if I’m being recorded.

So, I have to admit to being a tad scandalized at the recent proliferation of douche, douchebag, douchebaggery, and other derivations of the term. Maybe I’m being too narrow in my definition of douche. But this is what I take it to mean at first blush:

douche (dōōsh)
noun: A stream of water, often containing medicinal or cleansing agents, that is applied to a body part or cavity for hygienic
or therapeutic purposes.

To be more specific and indelicate, the stream of water in question was being applied to a particular part or cavity of the female anatomy. I grant that douche also is the French word for shower. I have trouble, however, interpreting shower as a term of denigration, deprecation, or condescension: “Man, my boss is a world-class shower-bag.” I suppose it could be a matter of inflection or interpretation. But that just doesn’t seem to have the same ring of derision to it.

Before we lead ourselves semantically astray, though, let’s not abandon the pertinent etymological origins, what say? Most folks who employ the terms under discussion here and their terminological ilk are likely under no sanitizing misconceptions about their usage (WARNING: THE FOLLOWING LINKS CONTAIN REALLY, REALLY BAD WORDS): douche, douchebag, douchebaggery.

How did we get to this point? There seem to be only three possibilities:

In any event, we’ve come a long way, Baby. And where we’re headed ain’t good.