What We Did On Our Spring Vacation 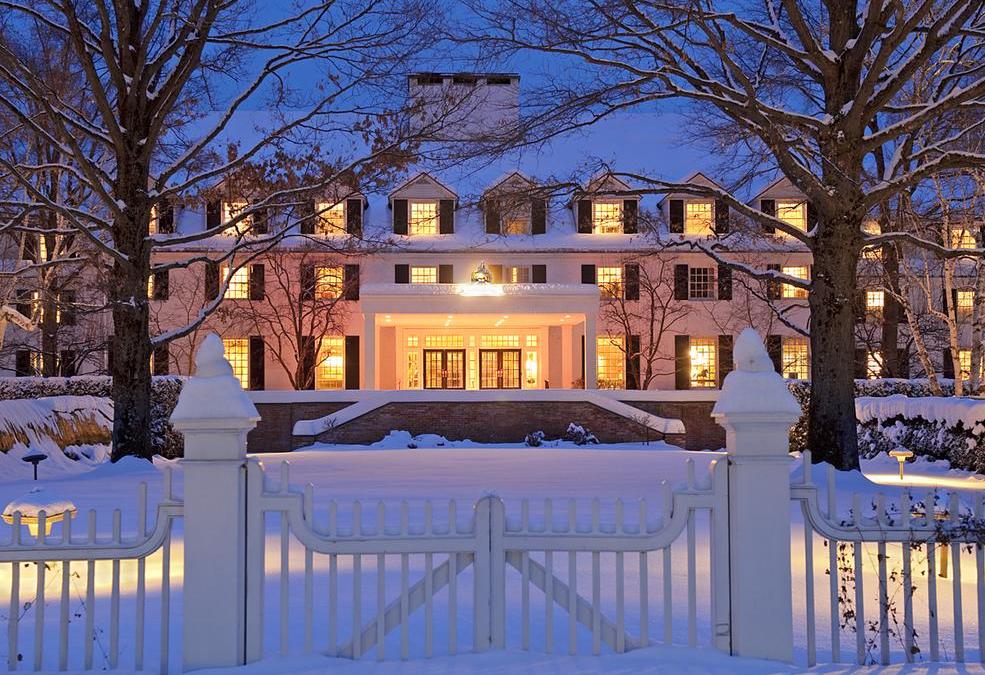 This past weekend, my wife and I had the opportunity to flee the confines of Connecticut for the pampering peace of the Woodstock Inn & Resort in Woodstock, Vermont. As we drove north on I-91 Friday afternoon, we encountered flourishing fusillades of flying flurries. And we arrived in Woodstock to find six inches of freshly fallen global warming.

Leaving the bellman to mush our bags to the building on his dog sled, we skied from the parking lot to the reception desk and warmed ourselves before the fire that roared in the lobby. Other guests recently arrived doffed the snowshoes, boots, parkas, ushankas, scarves, mitts, and balaclavas in which they’d adorned themselves to enjoy the seventeenth day following the vernal equinox.

When the weather broke on Saturday, the bright sunshine and sub-zero windchills summoned us out of doors to explore the countryside. We saw the Ottauquechee River, which we were led to understand contains running water in the summer. We learned the river is named for Otta “Don’t Call Me Otto” Untermeyer Quechee, a Canadian fur-trapper, gold miner, and concert pianist who, in 1743, journeyed down from Montreal (a trip known as “The Trek From Quebec”) to Vermont to get a river named for himself.

We visited the Quechee Gorge, the spot to which Otta (his friends called him “Queech”) once brought his betrothed, Penelope, for a picnic lunch. Queech ate so much that day he slept on the rocks for a week while Penelope eloped with another man. So prodigious was Queech’s repast that there’s a snack bar right there on Route 4, right by the Gorge, named in his honor.

We learned that while people visit Vermont for its skiing, maple syrup, dairy products, hiking, antiquing, book shopping, glass blowing, conservative politics, tropical climate, and Lake Champlain, the one thing for which people do not visit Vermont is the road conditions. The U.S. Army uses Vermont roads to test the durability of its tank treads. And all horseshoes in Vermont are required by PETA to be made of three-inch thick, vulcanized rubber.

We learned the State Car of Vermont is the Subaru. While Vermont is one of 30 states in the union that requires slower traffic to move right, it joins Maryland, Massachusetts, New Hampshire, New Jersey, and New York in allowing its drivers to blatantly defy the requirement. And it’s the only state in the union that celebrates such scofflaws by awarding them the keys to their respective cities, presenting them with an OTTA (Obstructing Traffic Totally Award — not Queech), and giving them new Subarus. Note: the tires on all Subarus in the state are required by the Vermont DOT to have treads of three-inch thick, vulcanized rubber.

We also learned Vermont is the source of the single biggest mystery in the United States; that is why, if the postal abbreviation for Vermont is VT, the University of Vermont is known as UVM.

We did manage to work in some relaxation during our spring vacation. And we do plan to go back to Vermont. But next time it’ll be for a full-blown meteorological/cultural anthropological study. We’re hopelessly fascinated by a place in which winter is called spring, Mud Season is marketed as Sugar Season, geographical landmarks are named for meals, and Subarus are as sacred as whiskey to an Irishman (not that I’d know anything about that).

In truth and in fairness, our Vermont experience has enabled us to consider for the first time in our lives the possibility of this non-New Englander writer’s  not being lunatic:

Springtime [in New England] is depressing for those who embrace a progressive view of history and experience. It does not gradually develop as spring is supposed to. Instead, the crocuses bloom and the grass grows, but the foliage is independent from the weather, which gets colder and colder and sadder and sadder until June when one day it becomes brutishly hot without warning … It was fitting, then, that the first people who chose to settle there were mentally suspect. (Rebecca Harrington, Penelope)

The fact that we’re planning to go back there means we’re not lunatic … or we’re mentally suspect.