Death By a Thousand Meetings 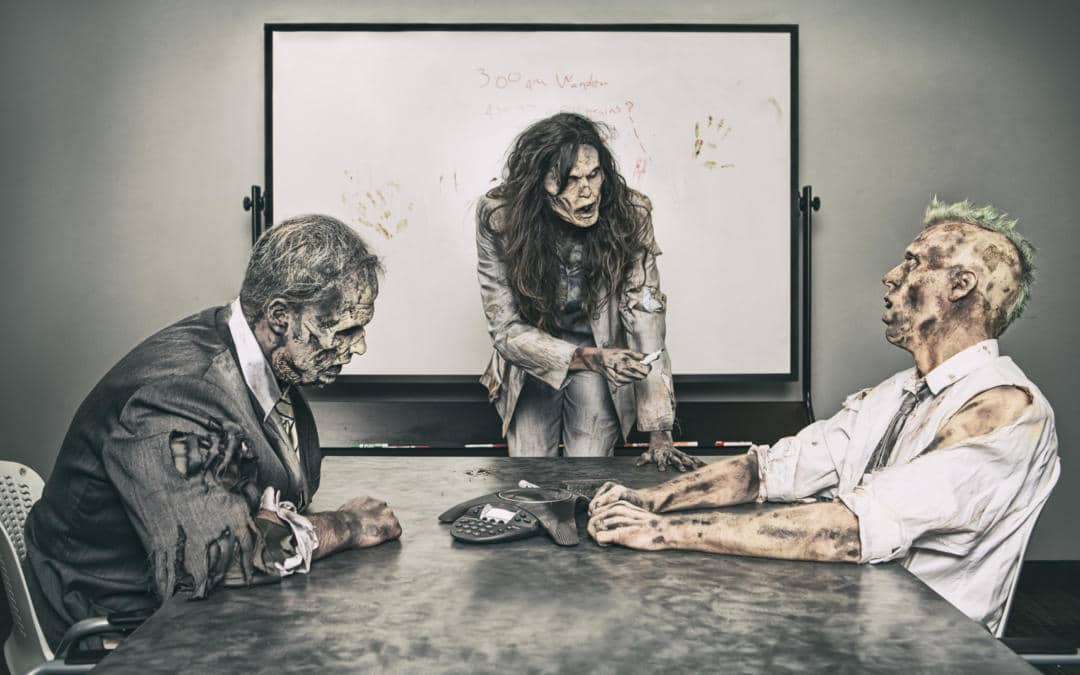 As you might have surmised from reading this and this, I’m not a fan of meetings. And I’ve always suspected every meeting I’ve ever attended cost me considerably more than time. Well, now, there’s apparent proof, courtesy of this study: “Implicit signals in small group settings and their impact on the expression of cognitive capacity and associated brain responses“, whence this excerpt derives:

Imagine that? When you spend time in a room with your uninspired, uninspiring, condescending corporate superiors, you saw off a few IQ points. And the more times you do that, the greater the likelihood for conflict and mayhem. Who knew?

When we schedule conference calls with clients and prospects, we give them the benefit of The Professor Rule; that is, the courtesy we extended to our college professors of waiting 15 minutes for them to arrive. If they didn’t, we left, without guilt or reproach. Untold numbers of cranial neurons could be saved by applying a slight variation of The Professor Rule to meetings: If the person who called or conducts the meeting doesn’t say anything intelligible, sensible, directive, or otherwise constructive in the first 15 minutes (five would be safer) — or if the person is condescending and/or disagreeable — walk out.

“But what if I get fired?!” I hear you cry. Not to worry. The same study that found diminished cognitive capacity and increased violence are caused by meetings discovered two other things:

Choose wisely, while you still have the cognitive capacity to do so. The life you save may be your own.

An addendum to the study cited above contained another finding, unrelated to meetings but nonetheless detrimental to our cognitive capacities in its passive perniciousness. According to the addendum, the only thing more deleterious to cognition than meetings is Oprah: Research subjects who watched anything in which Oprah appeared had their brains turn to oatmeal, which, in turn, caused Quaker to change its product strategy. Further, it was determined that after weekly appearances on Oprah led to his own TV show, Dr. Phil turned into Jerry Springer with a Ph.D.

But that’s a different topic and a whole other story.